Gemütlichkeit is the German word for "coziness" or "a place where one feels well", and Germany is a very cozy place at Christmastime!  No country on earth does a more magical Christmas than Germany, in my opinion.  :)


To kick off our holiday weekend, we will visit the Christmas Market on the main square in Munich called Marienplatz, shown below.  This picture doesn't even look real to me it is so magical.  I sometimes have to pinch myself that we really live here!
﻿
﻿ ﻿ ﻿

There is a wonderful window display of Steiff stuffed animals in winter settings, similar to FAO Schwarz in New York City, that we'll also look at with the kids.
I am really looking forward to seeing the wonder in their eyes.

﻿﻿
﻿﻿ ﻿﻿ ﻿﻿
Wishing you a peaceful and joyful Holiday!
Posted by Barbara Jordan Dettweiler on Wednesday, December 22, 2010 No comments:

The Magic of Urns

I am absolutely smitten with urns.  Maybe I have lived and traveled in Europe too long, but I keep finding more and more uses for them and think they are just beautiful!  Here are a few ideas for urns in many different sizes and settings.  I could go on and on...contact me if you'd like more ideas!﻿﻿﻿﻿ ﻿﻿ ﻿﻿﻿

The scale on these is pretty small but so nice.
They'd be great in a powder room or on a mantel. 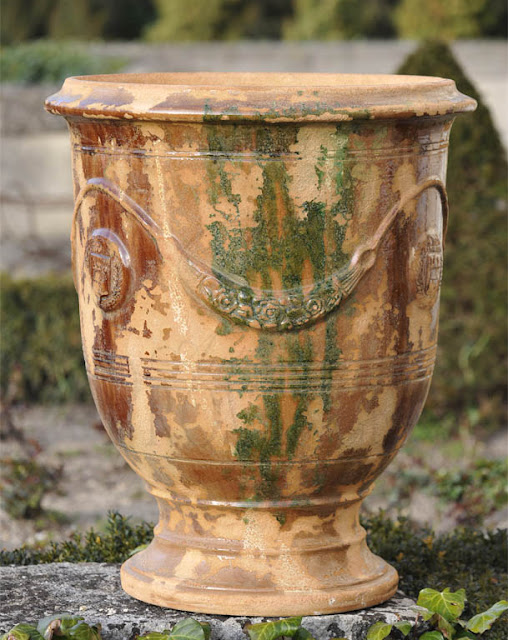 I saw a ton of these in Provence last year and fell in love.  I think one on each side of the front door with evergreens would be so lovely! 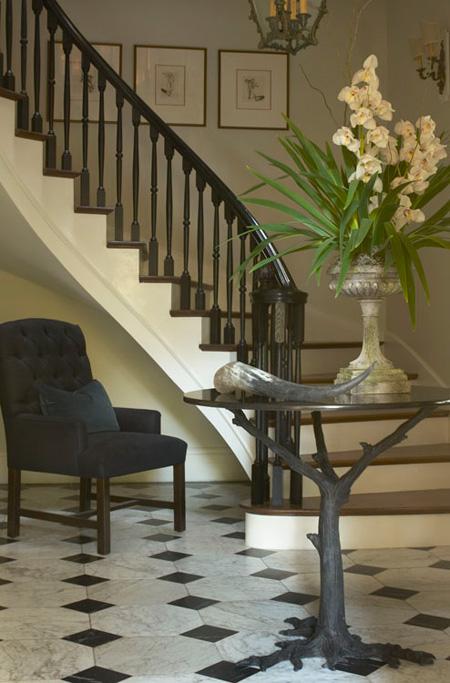 Ah...orchids.  You can't go wrong.
(Also love the horn although the vegetarian in me shivers a little bit when I see them.) 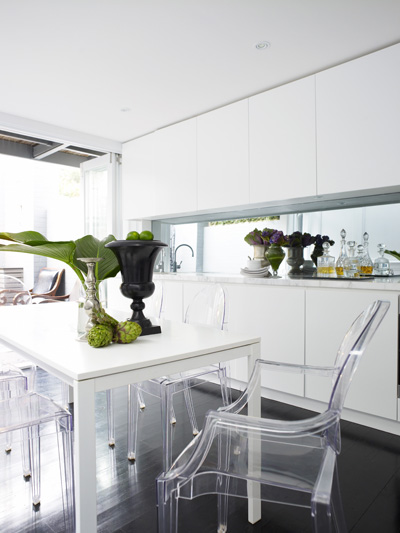 Limes in a black urn are a bit more contemporary so it gives it a very clean look. 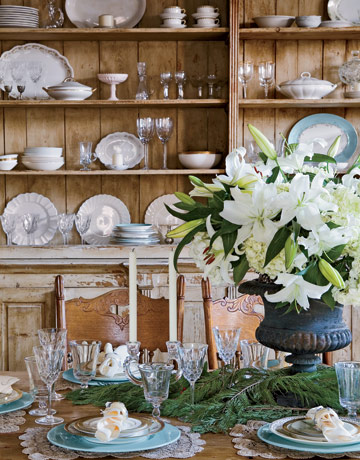 Very traditional, but stunning nonetheless.
Casablanca Lillies are right up there on my list of favorite flowers, so they get me every time.  Look how pretty they look with the fir boughs too... 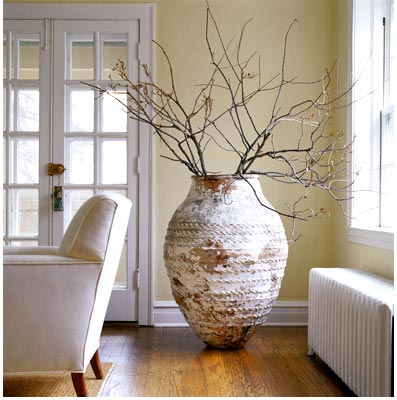 So cool.  So airy.  Love it!﻿
I took this picture at an antiques market in Provence last summer.  I love the idea of a few urns outside my kitchen with rosemary, thyme, basil and sage spilling out of them....
Posted by Barbara Jordan Dettweiler on Tuesday, December 21, 2010 No comments:

Call of the Wild: Zebra Ottomans

I find a touch of animal print in a room very refreshing because it introduces surprise in a sophisticated way.  I particularly love zebra prints on ottomans.  Two matching ottomans are great for extra seating of course, but they also look great tucked under an entry or sofa table and even here and there throughout the house - perhaps in a boring hallway- for a fun unexpected punch.  Here are some great examples of them in beautiful settings.  I have compared them to a lot of different color schemes and they paired quite nicely!

This combination of shells, dark woods, zebra ottomans and Hermes orange
combine some of my favorite things for a tailored look!
﻿﻿﻿﻿﻿
﻿﻿﻿﻿﻿

I like the zebra here alongside Lucite to give it a modern edge.
﻿
﻿ ﻿ ﻿

I love the oversized plant in this room for an exotic feel!
﻿
﻿ ﻿ ﻿ I think a little goes a long way, but I really love it!  What are your favorite designs for zebra?  Or do you hate it altogether?
Posted by Barbara Jordan Dettweiler on Tuesday, December 21, 2010 No comments:

I absolutely love the ruggedness of the Pacific Ocean along the coast of Oregon.  There are beautiful sand dunes, wild grasses, rocky cliffs and - often - magnificent storms.  Many people think rain at the beach is a bad thing, but I think it provides the perfect opportunity to cozy up next to a big picture window overlooking the waves and get lost in a great book.

I have collected a few dream house pictures from what would be my ideal house on the coast (if I ever win the lottery). 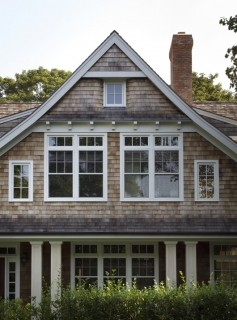 On the beach I prefer a shingled facade with white trim - very New England but also very typical in Oregon.  The Barefoot Contessa, perhaps my all time favorite chef, has a house like this surrounded by hydrangeas and I love it! 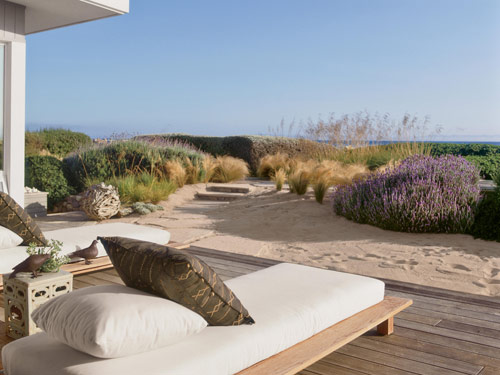 A gentle walk to the beach from the back porch would be my idea of heaven...
﻿
This kitchen is more casual than I would normally choose but I love the open shelving, vintage finds, etc.  Can't you just picture kids running in and out in sandy bare feet? 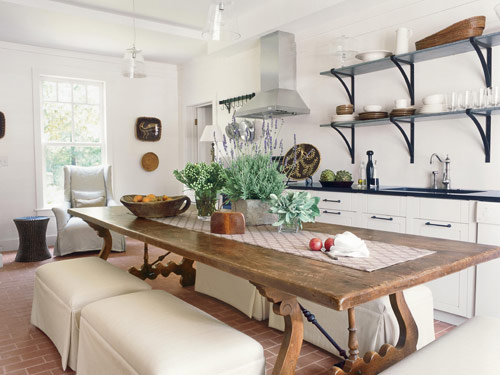 More open shelving but also an eat-in kitchen which I think would be a
great casual hang out.  I love the linen covered benches as seating too!
﻿
Wrinkly sea blue linens, all white candelight, a crisp chardonnay and
some irresistable fresh pasta.  Dinner is served! 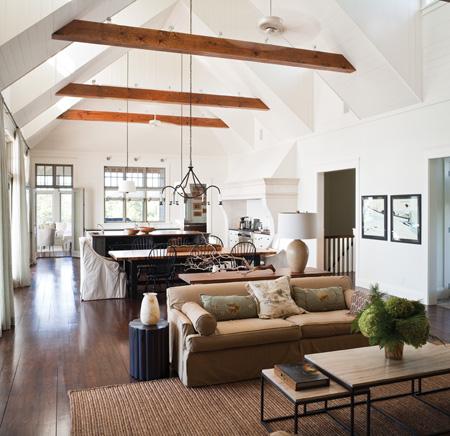 I think this open plan layout and the beamed ceilings set the perfect tone.

I would only add an ongoing game of Scrabble to the coffee table. 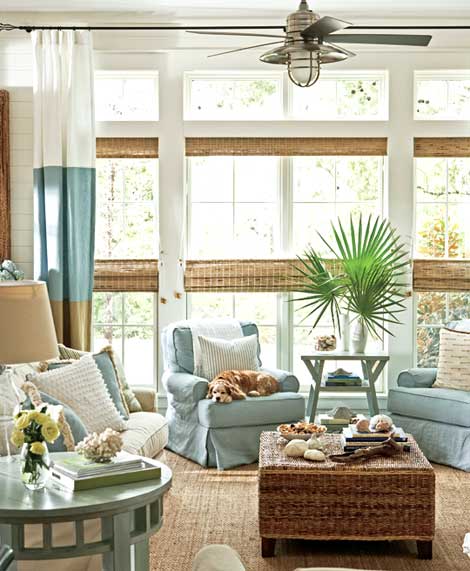 I like a range of blues and greens and a LOT of natural elements
in a sea-inspired room much like this one.﻿ 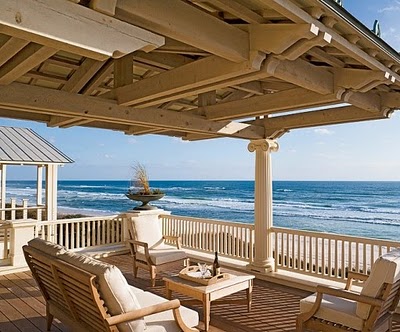 As we have traveled through Europe over the last few years I have been drawn more and more often to the architecture of each place.  I started taking pictures of doors in particular and have accumulated quite a collection!  I love the mystery of what might lie behind a door - especially those that are as old as these are!  Who has gathered there? What are their stories?  What brought them joy and sorrow?  What were their dreams?   Perhaps these will provide some exterior inspiration for some of you...

We stayed at a beautiful hotel in Arles, France last June and had fresh croissants for breakfast in their sublime courtyard.  I saw this door with hydrangeas blooming next to it and snapped a picture to remember the experience.  My husband and I still reminisce about that breakfast!
Barcelona, Spain September 2009.  Notice that there is a smaller door opening for people and a larger one - big enough for carriages.  The doors lead to an inner courtyard for green space.  This is a common design in Spain and a great one for city living.
I love this picture from Berlin (2009) because I feel like it
sums up the city well with all of its edginess and energy.
Eze, France June 2010...a small hill town overlooking the coast of southern France.
Corfu, Greece from Summer 2010.
Hall, Austria 2008 - a small town outside of Innsbruck.
I think this is where the door infatuation began...
London, England April 2010.  This is pretty much London in a nutshell, right?
Mallorca, Spain March 2008.  These doors inspired my Dream House front door!
Lisbon, Portugal June 2009.  I could go on and on about Lisbon.  More posts on that soon!
Venice, Italy July 2010.  Notice the steps leading right into the water...
Revaz, Switzerland June 2010 - a picturesque wine growing town
on the edge of Lake Geneva.
Kotor, Montenegro August 2010.  This town, and the
stunning fjord surrounding it, really surprised us with its beauty and charm!
Does anyone else out there share my love of doors?  My husband thinks I'm crazy, but he stops every time we pass a door when traveling and asks if I want to take a picture. :)  Does anyone out there have any great ideas for how to showcase these great shots and the memories that go along with them?
Posted by Barbara Jordan Dettweiler on Sunday, December 19, 2010 7 comments:


In 2009 we traveled to several spots in Portugal and my favorite stop was Lisbon.  I'm a city girl anyway, but this city really has something special.  I found it to be authentic, quaint and fascinating.  While there I fell in love with their soaps.  Apparently the Portuguese used to provide French royalty with their soap so they know what they are doing!  I found a few products with such great scents and to-die-for packaging that I thought I'd share them with you.

These are my all time favorites - from Claus Porto.  I bought some for myself and several for friends at my favorite shop in Lisbon called A Vida Portugesa.  This shop had the same feel of Anthropologie although more authentic since it is a one of a kind.  I am a sucker for packaging and I loved the combination of a beautiful pattern and art deco designs. 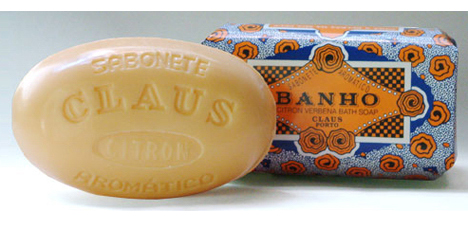 I also discovered Castelbel soaps and candles in Lisbon.  They were heavenly.  Period.  I spent a lot of time in a florist sniffing the selection and trying to decide.  I remember the florist had the most stunning black wall paper with birds and branches all over it - it created such a sultry mood in her shop.  I have been trying to figure out a way to work it into one of my design ideas ever since.  Anyway, here is an example of what they have to offer:

Who knew Portugal had such a great soap selection, among other things??  What are your thoughts?  Do you prefer the looks of these over the more well known Provence style soaps?
As an aside, how beautiful is this entry from a house we passed by in Lisbon?  Very unique, I thought...
Posted by Barbara Jordan Dettweiler on Sunday, December 19, 2010 No comments:

Last year we traveled to Belgium and I was so inspired by their design asthetics that, upon our return, I eagerly read everything I could about Belgian Design.  It seems to be catching on since all of Restoration Hardware's work over the last year seems to follow this approach.  I guess the secret is out but I still love how quietly refined it looks, without being too fussy or trying too hard to impress!  Beautiful rough hewn woods, natural linens, minimal color and a bit of sparkle - usually in the form of crystal chandeliers - really set this design apart from others.  Here are a few of my favorite images that show this beautiful approach to living... 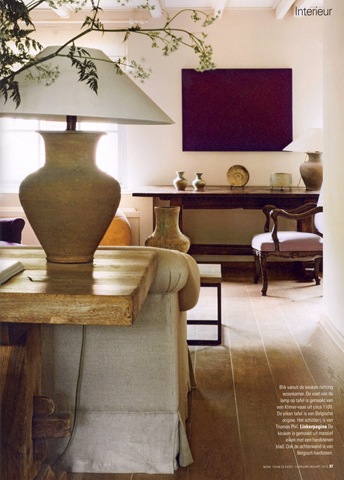 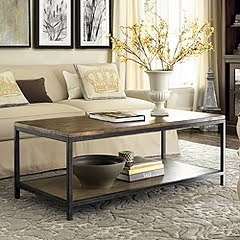 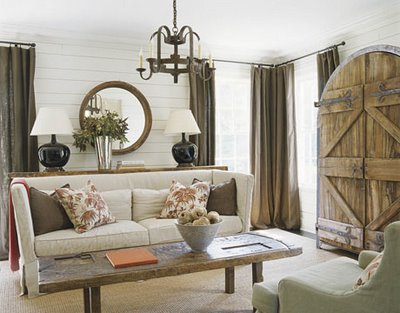 {Kay Douglass via House Beautiful}﻿
And finally a shot from beautiful Brugges where we stayed in Belgium.  We rented this
gorgeous apartment which had great design itself and wonderful hosts, not to mention the gorgeous architecture, canals and cobblestone streets in this gem of a town.  We loved our time there - including the chocolate, of course.  :)


What do you think?  Is Belgian Design too muted for you or do you love its refined, understated look?  I'd love to hear your thoughts.
Posted by Barbara Jordan Dettweiler on Sunday, December 19, 2010 3 comments:

﻿I came across this photo of a beautiful space by Martyn Lawrence-Bullard this week and the photos in the background got me reminiscing about Africa, my experiences there, and specifically design ideas.  I traveled to South Africa, Botswana and Zimbabwe over ten years ago now, but the experience definitely stays fresh in my mind.  The influence over centuries of so many cultures, both native and foreign, makes for an intriguing mix of design elements.  Here are a few pictures that will provide a visual design safari!


We stayed in a beautiful B&B in Capetown that had refined Dutch
elements mixed with great tribal accents, very similar to this picture.
On safari we stayed in some amazing "camps" in Botswana, and then on to the comfort and leisure of the Victoria Falls Hotel, an elegant old British Colonial hotel
with ties to days gone by.  We had high tea on this veranda.  So English!
I first fell in love with vintage travel posters like this one, lining the walls of the Victoria Falls Hotel.  They are from the days when traveling to exotic locations meant so much more adventure than it does today!
I love all of the natural elements involved in this setting. 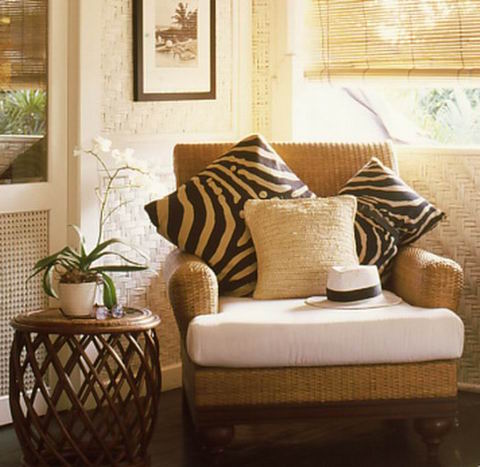 To me this look spells out African Colonial perfectly!
A bit exotic and a bit refined all in one.
Can't you just picture a tired, dusty explorer casually tossing down his hat and
reaching for a refreshing drink?
If you liked these images, I wrote a post a while ago specifically about
zebra prints that you can find here.
What do you think of African Design?
Posted by Barbara Jordan Dettweiler on Sunday, December 19, 2010 5 comments: